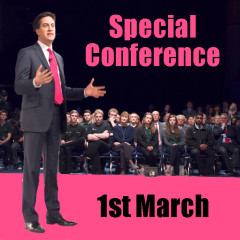 At the special conference on 1 March, Ed Miliband may well have the “Clause IV moment” his advisors sought, though Labour’s enemies are saying unions will have too much power as they probably always will. His proposals, made in the wake of a Falkirk “scandal” that never was, have lost their rationale.

If he wins the day, as now looks almost certain, it is not because trade unions and constituency parties are enthusiastic about them, or even agree with them. Nor is it because the consultation responses – which have been totally ignored in the report – favoured them… they didn’t. It is because the trade unions and constituency parties are instinctively loyal to him and want him to win in 2015. But this is not the way to make the most radical changes ever in the relationship between the trade unions and the party they founded over a century ago, so here are eight reasons still to vote against the Collins report.

The Collins report proposes two rules changes as well as its recommendations. They are on two separate subjects (Leadership elections and Primaries) and deal with different chapters. Normal practice in the Labour Party is to have separate votes on separate rule changes. This would allow you to decide your views and vote separately on each proposal. This may not happen because the NEC were told by the General Secretary that the procedure was up to the Conference Arrangements Committee (CAC) whilst the CAC were told that the NEC had decided to have only one vote! Is this contradiction an unfortunate coincidence or deliberate misinformation? Readers will have to make up their own minds – delegates may wish to enquire when the Special conference opens. In the meantime, you might want to consider proposing that your constituency party to send this emergency motion to the NEC & CAC:

“This CLP urges the NEC/CAC to ensure that there are separate votes at the Special Conference on 1 March on the report and on each rule change in line with normal procedure.”