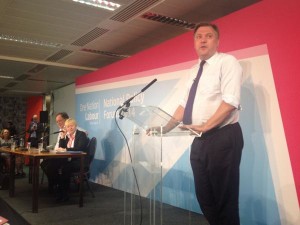 The climax of Labour’s formal policy process this weekend which had involved 1,300 amendments from local parties to eight policy documents, filtered down and composited by 77 regional representatives, was a debate on austerity. That’s fitting given that it is the foundation of the Coalition’s disastrous economic policy and, unfortunately, in a lighter version, of Ed Balls’s approach too.

What was less fitting, indeed shocking, was that it was a debate in which George McManus, the Yorkshire constituency representative moving the amendment, was given just one minute to speak, and Ed Balls the same. George made a great speech which you can read below. Ed’s speech consisted of a list of those who had withdrawn their amendments in favour of the “consensus wording” as if that was a sufficient argument for the perpetuation of austerity (and he ran over his time). There were no other speakers. The vote was 127 to 14 against the proposal that Labour’s policy be amended to read:

We recognise that the cost of living crisis is inextricably linked to government’s self-defeating austerity agenda. That is why we will introduce an emergency budget in 2015 to reject Tory spending plans for 2015-16 and beyond and set out how we will pursue a policy of investment for jobs and growth.”

Those voting against included some people representing the seven CLPs and numerous NPF members who had submitted almost identical wording and many more who essentially agreed with the amendment including representatives of all major trade unions (I’m told media and entertainment union BECTU voted for). After the vote, some of them, including leading MPs and trade unionists admitted their continuing support. They nevertheless felt compelled to vote against their own preferences and the policies of their unions.

Labour’s three-day weekend national policy forum (NPF) in Milton Keynes did involve very many hours of discussion about policy, but it was nothing like the policy debates party members are used to in their constituencies, nor those of which nowadays we see only small excerpts in television coverage of party conferences. 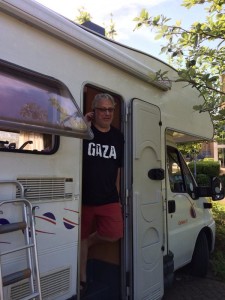 Most of it is not debate at all, but negotiation between NPF representatives and shadow ministers (or their special advisers aka SpAds). I was lucky, not being a member of the NPF and operating out of a camper van in the car park, to have observed and even participated in one such negotiation.  I feel no remorse because the SpAd presenting the leadership’s case wasn’t a member either. The discussion involving just three NPF members in a private meeting was detailed and at a high level, but it certainly was a far less democratic process than the compositing meetings I attended as a conference delegate in the 1980s which led to votes by hundreds of delegates between competing motions after a full debate.

You might ask why all the trade unions who are affiliated to — and indeed fund – the People’s Assembly against Austerity as well as Labour nevertheless vote to perpetuate it through at least the first year of a prospective Labour government. It means Labour would be responsible for massive cuts to public services required by the Tory budget they inherit. It means that public sector workers are very likely to face continuing pay cuts in real terms under a Labour government.

I can only assume that the trade union leaders who chose to take this course of action hope that their own angry members will not remember or will not understand that their leaders voted on their behalf for continuing austerity.

I am not from the school of political thought that regards the history of trade unionism as a history of cowardice and treachery by its leaders. For me, these people include friends as well as comrades. I think they are wrong and I think they should be held accountable for what they have chosen to do. But I do not think they should be denounced – they remain our leaders and we must move forward. We must understand why they have done what they have done and why, and try to put it right for the future.

Trade union leaders negotiate. That is that they do. But it is not what they should always do. Any negotiation, whether it is with management or the leadership of the Labour Party, succeeds only if it gives something to both parties. It creates a symbiotic relationship.

In the Labour movement, unity is important, not least for electoral success. However, as I have argued before, “real unity comes from a democratic decision-making process that gives decisions legitimacy and members ownership of those decisions, even if they have reservations about some of them.”

The NPF process in practice is not democratic. Consensus is built through coercion. Every consensus agreement that the trade unions reached was at the price of voting against any proposal which involved any spending commitment. Austerity lite had already been accepted by union leaders as the price of any deal even before they arrived in Milton Keynes. And it allowed Ed Balls and “Tory” Bob Roberts (Labour’s press supremo) to spin the final decision as:

Ed Balls, the shadow chancellor, said the vote showed there was widespread support in the party for a manifesto based on “big reform, not big spending” and that members endorsed the tough fiscal position adopted by the leadership.

Union leaders did of course win concessions, some of which were very important though from an original policy document that set a very low base and dampened (perhaps drowned) expectations. For example, the leadership did finally concede the inclusion of the word “wealth” in the “consensus wording” commitment:

Labour must demonstrate that even at a time of scarce resources it can radically reform the UK by tackling wealth and income inequality, poverty and improving living standards for all. Labour recognises that ordinary people and public services have borne the brunt of the current government’s deficit reduction programme”

It also includes the words “by driving up wages and creating decent jobs we will reduce the cost to taxpayers of low wages” drawn from a Unite amendment in the same section as George McManus’s one on an emergency budget.

There were beneficial concessions but at a price. Including the price of continuing austerity which we know will destroy jobs and reduce living standards. As we argued last week, had unions been prepared simply to vote alongside constituency parties for what they believed, we may not have acheived consensus but we could, at conference, have committed to end austerity and forged a genuine unity, not one based on coercion which will be short-lived. 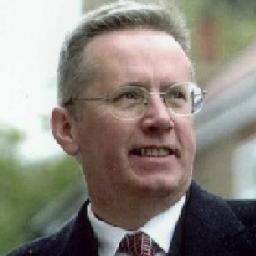 Before George McManus made his speech, he was asked if he wanted to withdraw his motion.  He refused and was invited to speak but Angela Eagle in the chair couldn’t see him. When he shouted “here I am“, Angela apologised and explained she couldn’t see him as there was a bright light behind him.  “That’s my halo” said George, to much laughter whereupon Angela said “I’d like to invite Saint George to the rostrum,” and this is what he said:

Comrades. I say comrades advisedly because there’s a war going on out there and it’s our comrades that are losing. I was proud to march with striking workers this month and I’ll do so again.

This amendment was motivated by the desire to communicate a message for the benefit of those workers that we should not box ourselves in to George’s Osborne’s austerity spending plans. Austerity, in my opinion is not the solution to our problems, it is in fact the cause. I want to see us win the election and the two Eds getting on with the job.

But at dinner the other night, Steve Richards [columnist and guest speaker – Ed] said ‘Get your message right’ and I don’t think the message workers are getting is the right one. Promising more austerity could damage, not improve our election chances.

May 2019 CAC Report by Seema Chandwani