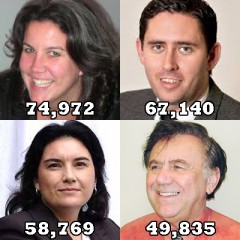 Those who have read the Yellow Pages delegates’ briefing (produced each day at Labour conference and available here) will have read that the oversight of Labour’s conference arrangements committee (CAC) elections has this year fallen short of the “open, transparent and trusted” political practice which Ed Miliband and Iain McNicol rightly expect. Unlike in Falkirk, there is incontrovertible evidence of misconduct and machine politics, for which the responsibility lies not with trade unions but elsewhere in the party.

Evidence has already been provided to the Party’s General Secretary that one young delegate was called to a meeting with a party official in his region and, within earshot of two witnesses (one of whch was me), told him “we are supporting Heidi Alexander and Tom Blenkinsop”, the two candidates who were declared winners of that election on Tuesday morning. Further delegates have since been identified in that region that were similarly entreated by that official as well as, so far, in four other regions concerning five other officials. This is in contravention of the staff code of conduct that expressly forbids party staff from canvassing.

We recognise that Iain McNicol, the Party’s General Secretary, has taken action to prevent party staff being partisan in internal elections and we welcome his commitment to investigate this new evidence. However, it is now very clear that misconduct in this election is widespread, and that the result of the election is therefore unsafe and a wider investigation is needed. The difference between the votes of Tom Blenkisop and Katy Clark is small enough for the switch of only 14 average sized constituency parties to alter the outcome of their election, and 23 parties to completely reverse the outcome.

Katy Clark and Peter Willsman stood to be the CLP representatives on the CAC precisely to ensure that delegates have a free and fair conference, that Labour is true to its principles and members’ rights are respected. Delegates can help this investigation. If you know that any party officer spoke to any delegate about the candidates in the CAC election or about how they should cast any votes, we would urge you or the delegate to provide the information in your possession to the Labour Party Executive Director of Governance and Party Services, Emilie Oldknow. Alternatively, you can provide CLPD with information in confidence.